formerly Government by the People

originally the Voting by Phone Foundation 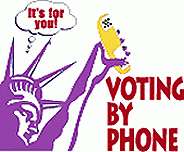 You deserve a vote –not just a voice- on the laws you live under!

This is an old-fashioned hypertext site. If you get lost, just click on your browser's "back" button (the left arrow at the upper left) until you get back to this "home" or index page.

News you can use!

In the U.S. we already have the basic tools to share the power, if we use them together:

1. Initiative laws (which allow citizens to propose and vote on legislation) now in effect in 24 U.S. states and

2. voting by telephone (internet’is great too)- successfully tested by our associate Dr. Vincent Campbell for the National Science Foundation in 1974. Inventor Buckminster Fuller, who first proposed "voting by telephone on all prominent questions before Congress" in his 194 0 book No More Secondhand God , coined the term for such combining of ideas: "synergy".

1. Legalize voting by phone (or Internet) in regular elections, at our option. Most of us will soon prefer it because it's:

2. Encourage more citizen-initiated legislation by requiring fewer signatures to get Initiatives on the ballot and/or by allowing petitioning by phone or internet. [The Initiative and Referendum Institute is working to get Initiative laws passed for the other 26 states and federally.]

3. Schedule voting quarterly as the Swiss do, to accommodate the increase in citizen Initiatives. A freer market of ideas. A more level playing field. At a cost savings.

In states and municipalities with existing Initiative laws, people can empower themselves by petitioning to put these three reforms onto the ballot. We were first in the world to put step 1 to the voters fo r the 1993 election in Boulder, Colorado as the Voting by Phone ballot initiative founded by your webmaster Evan Ravitz.

Everyone agrees we must reform government: Idealistic Democrats want campaign finance reform. Idealistic Republicans want term limits. But representatives of both parties aren't really doing these things: the foxes won't turn over the henhouse keys. St rong campaign finance reform ($100-limit) has been passed only by initiative: in Oregon, Montana and Missouri. Same for public campaign financing. The 20 states with term limits for state legislators all instituted them by initiative. Columnist Molly Ivins says:

"We keep making the mistake in this country of thinking about politics as a spectrum that runs from right to left. It's not. It's a scale that runs from top to bottom. And the only real questions are: Who's getting screwed and who's doing the screw ing?"

The Dalai Lama of Tibet is calling for a referendum on Tibet's future. Nelson Mandela has called for a referendum on white homelands in South Africa. And the Zapatista rebels in Chiapas, Me xico have made all their major decisions by referendum, resulting in the "women's laws," etc. and culminating in a "intercontinental" referendum in September 1995 and again in March 1999. Self-government is the wave of the future! (For a great analysis of the Zapatistas' use of the internet, see Zapatistas in Cyberspace.)

Our representatives will still be voting on legislation, but they'd better carry out the details of what we want, or improve on our ideas, or we'll stop them. We say let their ideas compete with ours, and let them facilitate.

There will still be a Bill of Rights to protect the minority from the "tyranny of the majority," just as it often protects us from majorities of representatives. Example: The US Supreme Court ruled 5/20/96 that Colorado's 1992 citizen- initiated Amendment Two unconstitutionally discriminates against gays; it never went into effect.

When the people make the decisions, they must live with them, so when mistakes are made there is a built-in incentive to fix them. Politicians, with careers on the line, have an incentive to cover up their mistakes.

WAYS YOU CAN HELP - Democracy is not a spectator sport!

To be notified of new developments send us a note!

* means our organization is featured

WAYS YOU CAN HELP "Sentiment without action is the ruination of the soul." -Edward Abbey

"But if direct democracy is not tried now, future generations will again champion it and there will be world civil wars until it receives adequate trial." - Buckminster Fuller, 1940

Back to the top